Musing Mondays is a weekly meme hosted by Just One More Page.

Today’s Musing Mondays post is about a random book.

Go to your bookshelf and pick a random book. No cheating now, just reach out and pick one. Now tell us about it – where did you get it? Why? Was it a gift? Does it hold any special memories? Did someone recommend it to you? etc.

The random book that was the first one to catch my attention from across the room was Journal of a Soul: The Autobiography of Pope John XXIII. 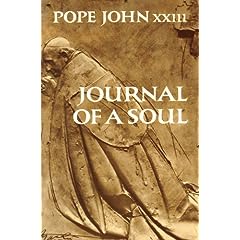 I got this book almost two years ago in a very peculiar way. It’s very much not typical of the types of books that are in most of my bookshelf.

My mother is a lawyer who does mostly real estate, wills, etc. in a small town. One of her clients had passed away, and the family was trying to get everything out of her house so that they could demolish it and rebuild from scratch (it was a really old house and was in very poor shape). I needed stuff for my apartment at the time, and so my parents brought me over to look at the house and see if there was anything I wanted. At that point, the family had already taken everything they wanted, and what was left was up for grabs, with anything remaining that was worth anything going to the Goodwill.

I ended up getting the two couches (which I no longer have, but are still in my old apartment with my old roommates) from her living room, a marble coffee table top, and a few books – including this one.

I’m not actually religious in any way, but for some reason my mother thought that it might be signed, so it was taken to add to my library. It turns out not to be signed at all, but it’s about a pope that played a large part in the overhaul of the Catholic church, so I imagine that it could be interesting. I’ve never gotten around to reading it, but at some point, I probably will.